On March 25th, 2012 Nick La Shea ran down to his car carrying a bag of antiquities he had just stolen from the museum. He sped away and immediately went to his client’s house. As he drove he thought of his haul and the amount of money he would be paid for his nights work.

Nick was evil with a capital E. He had no conscious and would gladly sell his mother if it would give him a good penny. Only one thing scared Nick and that was death.

He spread out his haul on the table in Mr. X’s house. Funny but of all the objects one seemed to fascinate Mr. X. It was a necklace with an inscription on it. 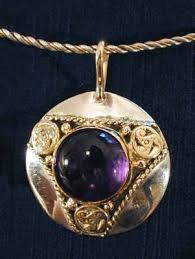 Nick asked for a translation and Mr. X stated, “Hold me tight and your wish will come to light”

Almost on a lark Nick grabbed the necklace and wished to live forever.

In an instance Mr. X clutched his heart and keeled over dead. Nick felt a surge come over him.

In the back of his mind he wondered if he had gained the life span of Mr. X added to his life. He repackaged the artifacts and added to the haul and left the house. He figured he would fence it to another of his contacts. During the next few hours he went to different locations and used the necklace to add to his life. At least that was what he thought was happening. In each case he would get a victim alone and then grabbing the necklace make the same wish. In each case the person picked for their young age would keel over dead and the surge would occur in Nick’s body.

Nick figure that if he were correct he had added over one hundred years to his life span. He would now by his mindset live until at least one hundred and seventy years.

But Nick was greedy and wanted more. In his vile mind he decided on a despicable plan. He would go to the local hospital and their maternity ward. There he would have access to many years to be added to his life. Sixty years a shot from a least a dozen just born babies would do it.

He parked across from the hospital and with this horrible plan in mind crossed the street.

The bus driver could not believe it. The man he just hit seemed to be preoccupied with something and had crossed in front of him like he was in a trance. The bus had sent him flying. Deep in his gut the bus driver felt he had killed him. To his amazement he found out later that the man was still alive.

Nick lay in the hospital attached to tubes and monitoring machines. He was conscious but in intense pain with a morphine drip. He couldn’t talk and if he could what could he say.

The doctors were amazed. Nick should be dead but instead lived, if you want to call it living, in the hospital hooked to machines for one hundred and thirty years. Unfortunately the necklace worked so well.