It is funny how some countries have become a word association.  Like Sweden is Swedish meatballs.  Now I really do not know much about them.  So I looked them up.

Directions
Watch how to make this recipe.

Tear the bread into pieces and place in a small mixing bowl along with the milk. Set aside.

In a 12-inch straight sided saute pan over medium heat, melt 1 tablespoon of the butter. Add the onion and a pinch of salt and sweat until the onions are soft. Remove from the heat and set aside.

In the bowl of a stand mixer, combine the bread and milk mixture, ground chuck, pork, egg yolks, 1 teaspoon of kosher salt, black pepper, allspice, nutmeg, and onions. Beat on medium speed for 1 to 2 minutes.

Heat the remaining butter in the saute pan over medium-low heat, or in an electric skillet set to 250 degrees F. Add the meatballs and saute until golden brown on all sides, about 7 to 10 minutes. Remove the meatballs to an ovenproof dish using a slotted spoon and place in the warmed oven.

Once all of the meatballs are cooked, decrease the heat to low and add the flour to the pan or skillet. Whisk until lightly browned, approximately 1 to 2 minutes. Gradually add the beef stock and whisk until sauce begins to thicken. Add the cream and continue to cook until the gravy reaches the desired consistency. Remove the meatballs from the oven, cover with the gravy and serve.

then I thought what about other balls.  example other countries and to my amazement I found the following

So every country has their version of balls.  But the last one gets me.  faggots are spicy balls served on plates in England.  I wonder if the queen has had these faggot balls.  How does the King feel about that? 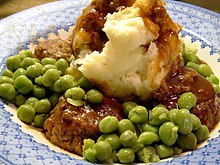 Faggots are a traditional dish in the UK,[1][2] especially South and Mid Wales and the Midlands of England.[3][4][5] It is made from meat off-cuts and offal, especially pork.[3] A faggot is traditionally made from pig’s heart, liver and fatty belly meat or bacon minced together, with herbs added for flavouring and sometimes bread crumbs.

Faggots originated as a traditional cheap food of ordinary country people in Western England, particularly west Wiltshire and the West Midlands.[6] Their popularity spread from there, especially to South Wales in the mid-nineteenth century, when many agricultural workers left the land to work in the rapidly expanding industry and mines of that area. Faggots are also known as “ducks” in the Yorkshire, Lincolnshire and Lancashire, often as “Savoury Ducks“. The first use of the term in print was in the Manchester Courier and Lancashire General Advertiser of Saturday 3 June 1843, a news report of a gluttonous man who ate twenty of them.[7]

One thought on “Balls around the world.”